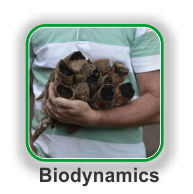 We came to BioDynamics indirectly, at roughly the same time that we came to homeopathy.
Having somehow survived the ‘Seventies’ with sanity relatively intact, our first instinct was to smirk and turn away from the poorly written literature on the subject at that time.
Life, however kept pushing it back in our faces and eventually we decided to explore the concepts with a slightly more open mind.
‘Bio Dynamics’ is usually discussed among farmers and most of the literature available, especially the older, more direct literature is worded in a way that assumes that you have fundamental farming background. I do not, and assume that you also have a slightly more suburban vocabulary, so I will be as direct and explanitive as possible.
As I mentioned previously, BioDynamics is not a replacement for religion or dogma of any kind, and it does not require your faith or belief to work. It sprang from some enlightened research into the almanac’s of European farmers at the beginning of the 20th Century. Decades before the term ‘Permaculture’ was coined there was a recognition that we simply had to get to know the earth better and work with the seasons and the ‘instinct’ that is inerrant in nature, to better serve our own needs. I have no desire to argue, debate or philosophize regarding the principles of bio dynamics or homeopathy, because it is sufficient to me that it actually works. Why can come later, when I have the leisure to contemplate my navel at great length.
Firstly, the Lunar Month.
We easily accept that the moon controls our tides because it’s effect is so easily seen as it is happening. We calculate the tides, predict the fishing patterns and plan our holidays on the direct effect of the moon on the oceans of the earth. It is only a small leap to accepting that those same rules apply to our planting, harvesting and tending of the earth.
It is unfortunate that we do not naturally witness the effects that the moon has on the earth before we start using it, but logic does suggest that the tiny area of land (compared to the massive amounts of water on our earth) must be affected in some way as well. We have noticed over the years that seedlings grow upwards faster as the moon rises.
We have noticed that root crops grow deeper and stronger as the moon diminishes.
We have noticed that some seeds planted as the moon was waning did not germinate or did so poorly.
PREPARATION 500
COW HORN MANURE – A general but powerful ‘pick me up’ for the garden. Essential. First.
PREPARATION 501
HORN SILICA Silica makes the plants receptive to everything else.
PREPARATION 502
YARROW
Achillea millefolium – Plants, in order to grow properly, need to have a certain ability to sense what they need from the earth and the air. Yarrow prep, helps draw in properties from the atmosphere to replenish a soil grown tired through many years of cultivation or abuse.
PREPARATION 503
GERMAN CHAMOMILE
Matricaria chamomilla – Elements that are necessary for plant growth include potash, calcium and various compounds of calcium. Chamomile enables the plants to use calcium and helps to stabilise plant nutrients, stop excessive fermentation and boost plant growth.
PREPARATION 504
STINGING NETTLE
Urtica dioica – The stinging nettle is the best contributor to plant growth, it can cannot be replaced by any other plant or suppliment and helps to stabilise nitrogen in the soil.
PREPARATION 505
OAK BARK
Quercus robur – The plant that contains the greatest abundance of calcium is Oak and it’s natural properties help to ward off plant diseases and fungal attacks.
PREPARATION 506
DANDELION
Taraxacum officinale – The best intermediary to enable plants to get the best value from your compost or manure and add living silicea to the soil.
PREPARATION 507
VALERIAN
Valeriana officinalis – Provides the garden with the means to produce the best flower, seed and fruit. During winter, it helps protect from frost to an amazing degree. Since we started using it during winter, we have never lost a coffee tree to frost.
PREPARATION 508
EQUISETUM
Equisetum arvense – Declared a weed throughout most of Australia, this fantastic plant enables the garden to ‘buff up’ providing strength to climbers especially.