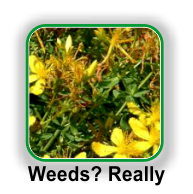 In one sense, a weed is anything you don’t want in your garden. Weeds range from the harmless and easy to manage (so-called “volunteer” tomatoes, for example, that grow from the seeds of fruit you didn’t harvest the past year) to the nasty (such as Thistle, which can take over and ruin your garden unless you take aggressive steps to control it). One person’s weed may be another person’s treasure (the herb chamomile is one example of this – some people love it and some hate it).

Having soil exposed encourages weeds to grow, so keeping as much of your soil covered as much of the time as possible is goal number one.

While you might want to expose your whole garden at the beginning of the season to add composts, you will need to uncover parts of it to plant certain seeds, most of your garden can be covered most of the time with mulch of some kind or other.

Weeds will still germinate under your mulch, but many of them will be unable to push through the mulch, and those that do make it through the mulch will be weak and easier to pull out than if they had grown from unmulched soil.
Whether you mulch or not, you will still have to deal with at least some weeds. Organic farmers use many different tools to kill or remove weeds, but in a garden your two main options are hand weeding (often with some kind of small tool to help you) and weeding with a hoe.
However you weed, it is critical to remove the roots of your weeds. If you rip off or slice off only the tops, the roots will send up new stems and leaves and it will be even harder to get the roots out than it would have been before.

It is often easiest to weed after a rain or after watering your garden because the roots come up more easily. However, if you pull weeds out of wet soil and let them sit in contact with the ground in your garden, you’ll be surprised by how many of them can reestablish their connection to the soil and survive. For this reason it’s important to physically remove pulled weeds from your garden (to your compost pile, for example), or at least to make sure that their roots can’t reach the soil.

For most of us, those one and half hours could be better spent doing other things.

Even if you could pull every weed that came up, you would still have weeds in the future, so preventing every weed from growing is not worth your time.

That said, weeding is important overall, as weeds can seriously impact the production of your garden, and there are some weeds that you need to control as aggressively as possible, or in the end you’ll have no garden left at all.

Even if you do let weeds grow, you can do yourself (and your neighbors) a favor by preventing them from going to seed – just use a tool of some sort to cut off the flowering heads before seeds appear.

Grass weeds – a special case
If you are creating a new garden plot from a space that previously had grass growing on it (or if you
have taken over a garden that has been invaded by grass weeds), then you may have some different
and potentially fairly labor-intensive weeding to do. We have found over the decades that preparing well before we plan to dig and sow is best.

Plan out your garden and mark it out clearly. Next, cover the grass with flat cardboard making sure that no gaps are evident. Place soil, bricks or debris on top of the cardboard and walk away for a month or so.

This will kill the grassroots properly, unlike herbacides, and allow the soil to be cultivated when you are ready to dig.