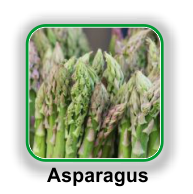 A perennial whose young stems are usually eaten steamed (but sometimes raw).
Should not be harvested until the third year after planting, but then can yield for twenty years.
Harvest stems, or “spears” when they are no taller than 20 cm (8 in).
Do not harvest for more than one month the first year you harvest.
In later years, you can harvest for 8 weeks, but do not remove all of the spears that come up during that time (let about a quarter of them grow).
Can be easily grown from seed, later, from one-year-old root masses, or “crowns.”
Seed is best scarified a little by rubbing lightly between two washing up scourers.
Soak overnight on the day before you plan to sow.
We keep our plants in pots for the first year for convenience and higher transplant success rate.
When ready to plant out you simply spread the crowns out neatly in a trench with the roots down and buds up.
Cover the crowns with two fingers of soil and water them thoroughly.
It may take several weeks for the plants to send up their first spears.
As the spears get larger, gradually fill in the remainder of the trench.
Asparagus should be fertilized every year to maintain productivity – use any solid or liquid organic fertilizer and apply in August (years 1-3 of your planting) or January (years 4 and up) at the rate suggested on the package. Some growers also put up to 5 cm (2in) of soil or compost each year on top of their asparagus, as the crowns tend to rise toward the surface.
Because it is a long-lived perennial, asparagus plantings can tend to accumulate weeds. Make sure to weed your asparagus planting thoroughly, and mulch it heavily with straw after you fertilize it in the spring (the spears can come up through the straw, but many weeds cannot; if you have leaves but not straw, wait to mulch until the spears are up, since the spears have a hard time coming up through wet, packed-down leaves). Each Winter after frost, cut off the dead asparagus stems a few cm above ground and put them in the compost.